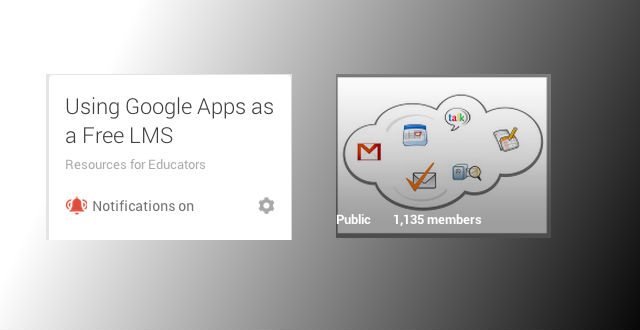 There I said it. I am not awed by the latest and greatest in social media as a method to transform my online pedagogy. In fact after a semester of experimenting with Google Apps as a free LMS I have decided to cull down to a few basics. Google+ (except Hangouts on Air) may get the axe.

Throughout the semester I have been informally surveying my students about my instructional design decisions. The course, in its original design, used Google Sites to organize learning in modules, embedded Google Groups for discussions, blogger for reflective writing, and Google+ for sharing and discussing research.

Students often noted that too many tools were utilized. Many also adapted to the tools and created a workflow I never intended. For example I asked students to review teaching videos and post a critique to Google+. Some chose just to create a post on Google+ other wrote their critique on their blog and shared a link on Google+.

So I decided to experiment. In the last set of modules (one teacher created the other modules created by students) I tried just to use Google+. Here is my initial follow up reflections.

A comparison of the literary discussion on both Google Groups (embedded into my course website) revealed more in depth and text based discussions on Google Groups compared to Google+. The students also posted more follow up questions and larger word counts.

The quality of written response does not bother me though. This could be easily remedied. I could model more academic discourse within Google+. With time the students could engage in text based discourse on Google+. The “read more” feature though demonstrates Google+ is not meant for long form writing.

Better yet I could take an idea from my students. Some of my participants wrote an initial response on Blogger and shared a link to their blog. I could, for example, have all initial responses to reading be a blog post and all follow up discussion be comments within Google+.

This approach has a few pitfalls. Google+ enabled comments on blogger do not appear under the initial link shared by the author. Furthermore the commenter has to make sure just to share it within our community or the comment as well as the blog post go public. While I encourage students to learn in the open they have a right to privacy.

I have long feared the tyranny of the immediacy on stackable social media. I tried my best to mediate the situation by creating a category for each module and encouraging the use of hashtags. Even with these steps students struggled with navigation. Often when you click on a category Google+ may display an algorithmically determined “best” content. You can click to see the posts sequentially but not all students realized this.

The automatic hashtags, when trying to use an LMS, actually hampered navigation. I had to teac h students haow to search within Google+. I believe in the mantra whenever students must make inferences as to the location of materials you have made poor instructional design decisions.

I tried to organize their activities and encourage students to post their responses under my initial post. Yet this was not always possible. For example in one of my learning activities students had to post an original poem they created on Google Docs. You can not share links, docs, and prompts in replies to post Thus students had to create a new post, follow the correct naming protocol. As the modules were self paced and could be completed in any order this lead to a cluttered feed.

Video is such a powerful tool in online education. No not my pre-recorded lectures, but artifacts of student work. In my f2f class students had to submit written mini-lessons. I did not have enough classroom time for everyone to present their teaching live. Yet in my online class everyone had to record themselves teaching a mini-lesson.

There was a stark difference in thee quality of feedback I could offer. In almost all instances every student included modeling in their lesson plan. Yet when I watched videotaped lessons it was not always present. This provided formative data that students did not fully grasp modeling. If I just used my paper based method for grading I would have thought the opposite.

Hangouts on Air are the best pedagogical feature of Google+. Even if I drop Google+ as a learning space I would still utilize Hangouts. Hangouts on Air though again raise privacy concerns. I do let students know they can immediately go in and switch a video to private after the Hangout is completed but for a short time anyone anywhere can see what students are doing. This is a violation of basic privacy protections in higher education.

Instead of HoA I might have to do video parties instead. This would require creating circles for my entire class and then circles for each group. Students would have to record their screens while throwing video parties. I of course would like to encourage students to use HoA but if any one student wants to keep their learning private I cannot use HoA.

Even though I believe organizing my course around Google Sites over Google+ is better instructional design I am not ready to give up completely. Next semester I am teaching multiple online classes. I am debating setting one class up on Google Sites and the other class up on Google+. This would be a great self study.

Google+ is a powerful learning tool. I use it every day. I just wonder if it is better for more informal or less structured learning rather than a formally designed class. I find so much values in communities on Google+. I get just in time instruction and engage in wonderful conversations. I still want to see if I can translate this into my classrooms.

I had argued earlier in #CE13 that we really need to think about developing a web presence and not a portfolio. As you know I am using Google Apps as a Free LMS for a writing intensive class I currently teach. I am focusing much of my work on modeling and teaching multimodal composition.

My students are developing a web presence (which they may choose to keep private). They have developed a blog, a Google+ account, and participate in our Modules on Google Sites. They create infographics using Glogster, classroom diagrams in Google Draw,review children’s literature on Wikispaces, and participate in book discussions using Google Hangouts on Air.

The students, by developing a web presence, already have collected their learning artifacts. I realized this when I scrolled through our Google+ Community. The students had all just uploaded a reading mini-lesson they could teach.It was the performance assessment for our reader’s workshop module. Sharing the videos on Google+ allowed for easy feedback and reflection.

I can not teach writing instruction without a focus on portfolio assessment methods. Nor can I teach multimodal composition without students developing portfolios of their own work. So I have decided to make my last module focus on the devlopment of a portfolio.

I hope to do this in Google+ (instead of a Google Site). This is where I am looking for help and feedback. I am thinking about having students develop a Page within Google+ at the end of the semester. I am thinking they could highlight blog posts they wrote, videos they created, and document their learning process. Do folks have any experience with developing Google+ Pages? What are the limitations? Are my ideas possible?

After much prodding from Ian (@wiobyrne) I am attempting to move my classes this fall from BB9 to using Google Apps as an LMS. I always wanted to break away from Blackboard. Not because I do not like the affordances of the platform. My main reason was I need to model digital teaching and learning using digital texts and tools that future classrooms will be able to access.

Testing out Google Apps as an LMS

I piloted it this past year with an iPad professional development course I ran with Branford Public Schools. I had a few revelations around discussion in online courses. First and foremost is the idea that social networks are not the place for deep analytical academic discourse.

I have had this belief for almost as long as social networks emerged in the classroom. I remember back to NCTE in 2007 when a few of us were sitting around a table discussing research agendas. Nings were the thing and everyone wanetd to hop on and move their class to social networks. I argued then, as I do now, that stackable unthreaded conversations do not have the affordances for deep conversations.

Yet I do see the power of social media in terms of building a sense of community and I have had wonderful conversations in Google+ Communities. Still running a classroom in Google+ or Edmodo is does not have the efficacy of an onld school discussion board.

Discussion in Google Apps as an LMS.

I thought you basically had two choices. Embedding Google Groups or creating a Google+ Community. I am now leaning to a more a hybrid approach that incoroprates three elements:

Google Groups will be used to discuss readings (videos,texts, picturres). As an instructor I need to be able to track the thoughts and developments of threads. I do not need to lose posts based on the tyranny of the immediate.

Google+ will be used to build community. Thus I will create a class community for picture sharing and general discussion. Most important folks will share resources they find. We will curate our class identity. Students will also share links to their longer form writing via personal blogs.

You can’t teach writing and not be a writer. Period. The class I will be testing out is a course in children’s literature and literacy. Thus I ask my students to write. I have used Blogger in the past and created a bundle in Google Reader. That option is now out. So what I will do now is ask folks to share their most recent posts to our Community. They will also enable Google+ comments on their blogs.

I love the integration of Google+ into my WordPress blog. I am finding my most active discussions come from Google+ versus my followers or those unlucky few who stumble on my blog. I will have my students do the same in Blogger. You can easily integrate comments from Google+. I feel this will go a long way to creating a community of writers any literacy classroom needs.