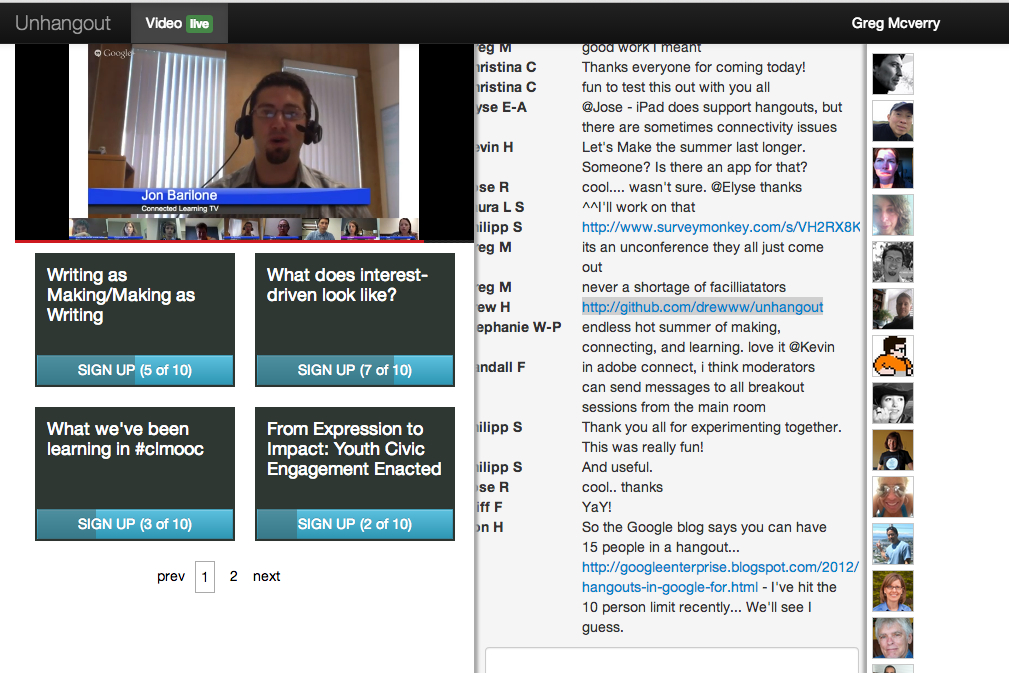 Today I was fortunate to participate my first, and possibly the first ever unhangout. I can not contain my excitement about this wonderful tool.

Unhangout is another wonderful project from the MIT Media Lab and supported by the MacArthur Foundation. It is an open source project and those more familiar with the innards of code can modify and use. Basically, unhangout works as a platform for virtual unconferences. 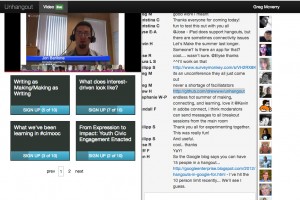 Anyone familiar with the BarCamp or EdCamp movements will understand the workflow. There was a lobby where participants could join a Google Hangout OnAir. The lobby had a wonderful chat feature.

Then there were breakout sessions organized into separate hangouts. Thus ten people could join a session.

Today’s unconference was a joint venture from the #clmooc sponsored by the National Writing Project and connectedlearningtv. The developers from the MIT Media Lab also attended. I joined late and entered the room Writing as Making/Making as Writing. Their were seven other participants in the room. The Google Hangout worked, beyond some usual bandwidth glitches, quite well. I was able to share stories of what happens when we “schoolify” making and discussed how writing is both instant improv and a deep reflective process.

There were some limitations. Today’s unconference was small scale. Google Hangouts may or may not have a cap of 10 participants. This would limit the number of people who could actively participate in each breakout session. Yet maybe smaller sessions will allow for more in depth conversation. I cannot wait to see where the MIT Media Lab developers: Philipp Schmidt, Drew Harry, Srishti Sethi take the project.

Overall, for me, unhangout is one of the most exciting digital texts and tools to emerge in sometime. In terms of classroom use I see many potential opportunities. We could have interest driven self directed professional development (i.e.#edcamp). Students could join book clubs or discuss specific disciplinary texts across districts, states, and international borders. Most importantly students could find others with similar interest driven passions and create their own unhangout experience. This would unite the connected learning principles with emerging pedagogies of digital texts and tools.

Yesterday, as everyone knows by now, Google released Chromecast. The device which allows video playback through HDMI is the band aid for schools dealing with two operating systems: Chrome OS and Android. I have long advocated for GAFE and Chrome in schools with two major caveats: Chromebooks and tablets do not work on the same operating system, and two, the educational offerings in the app stores are not as robust.

Chromecast helps to address both these issues.

I firmly believe, and have argued extensively, that the era of mounted IWB’s is over. Instead schools could buy a tablet and a mirroring device and the IWB can be in the hands of any student in the classroom. The tyranny of the teacher in front of the classroom is broken at a fraction of the cost. Until now this solution only worked, easily at least, with iOS. First schools purchased Chromebooks versus Android tablets. IWB web extensions lose some functionality with lack of portability. Second the IWB apps in the Android playstore are a far cry from apps like Explain Everything available for iOS.

Now with Chromecast a teacher can access the web extensions available in the Chrome browser on their Android tablet. There are some developing (yet still not as robust) IWB extensions available in the Chrome browser. This means that schools can get an IWB in the hands of any student for under $500 (Nexus 7 tablet $230, chromecast $42, and hdmi converter for projector $50). That is a way more cost efficient solution than purchasing a SmartBoard.

I was initially excited when Google announced the Education Play Store addition. The lack of apps has been a major hang up in recommending Android solution to GAFE schools. My initial excitement quickly faded tough as I realized most GAFE schools are Chrome OS schools and not Android schools.

Chromecast can help address the issue. Schools could now purchase Chromebooks and Nexus 7 tablets (still cheaper than one iOS device) and have some level of interoperability. The extensions I recommend to schools are growing everyday. Currently I use extensions such as: Google Drive, Evernote, Slide Rocket,LucidChart, Hello Fax, PDFZen, WeVideo, Pixlr,Feedly, GeoGbra,Flashcards, Voicethread, Voice Comments, Mangahigh, and Simple Whiteboard.

Being able to wirelessly display these is a huge benefit.

Chromecast does not solve all the issues schools face with having to choose between Chrome OS computers and Android tablets may be an important band aid, and a step in the right direction. It will be interesting to see how Chromecast, since it is not a “casting” device like Apple TV will work in schools.