Yesterday, as everyone knows by now, Google released Chromecast. The device which allows video playback through HDMI is the band aid for schools dealing with two operating systems: Chrome OS and Android. I have long advocated for GAFE and Chrome in schools with two major caveats: Chromebooks and tablets do not work on the same operating system, and two, the educational offerings in the app stores are not as robust.

Chromecast helps to address both these issues.

I firmly believe, and have argued extensively, that the era of mounted IWB’s is over. Instead schools could buy a tablet and a mirroring device and the IWB can be in the hands of any student in the classroom. The tyranny of the teacher in front of the classroom is broken at a fraction of the cost. Until now this solution only worked, easily at least, with iOS. First schools purchased Chromebooks versus Android tablets. IWB web extensions lose some functionality with lack of portability. Second the IWB apps in the Android playstore are a far cry from apps like Explain Everything available for iOS.

Now with Chromecast a teacher can access the web extensions available in the Chrome browser on their Android tablet. There are some developing (yet still not as robust) IWB extensions available in the Chrome browser. This means that schools can get an IWB in the hands of any student for under $500 (Nexus 7 tablet $230, chromecast $42, and hdmi converter for projector $50). That is a way more cost efficient solution than purchasing a SmartBoard.

I was initially excited when Google announced the Education Play Store addition. The lack of apps has been a major hang up in recommending Android solution to GAFE schools. My initial excitement quickly faded tough as I realized most GAFE schools are Chrome OS schools and not Android schools.

Chromecast can help address the issue. Schools could now purchase Chromebooks and Nexus 7 tablets (still cheaper than one iOS device) and have some level of interoperability. The extensions I recommend to schools are growing everyday. Currently I use extensions such as: Google Drive, Evernote, Slide Rocket,LucidChart, Hello Fax, PDFZen, WeVideo, Pixlr,Feedly, GeoGbra,Flashcards, Voicethread, Voice Comments, Mangahigh, and Simple Whiteboard.

Being able to wirelessly display these is a huge benefit.

Chromecast does not solve all the issues schools face with having to choose between Chrome OS computers and Android tablets may be an important band aid, and a step in the right direction. It will be interesting to see how Chromecast, since it is not a “casting” device like Apple TV will work in schools.

UPDATE: After listening to last week’s episode of TWIT (the Google I/O summary. I realized that my hope was a little overblown. Google Play for Education will be for the Android Store. The Chromebooks of course use the Chrome Web store. So until these two infrastructures talk schools must decide do the want an Android tablet or a Chromebook.

Will it be a game changer? Yesterday, at Google I/O, Google stepped up their educational game. As many of you know I would love to throw my weight behind Chrome initiatives in 1:1 classroom. The price point is right, the enterprise features fit, Google Drive and Sites can be the LMS…but…the Apps just are not there. 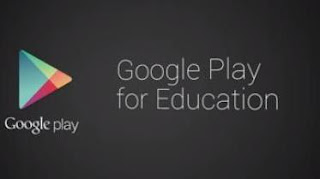 Now I have argued in the past that the teacher and not the app matters. Yet there are glaring holes in the app infrastructure in the Play Store. These are tools that enhance teacher pedagogical goals. Most damaging for me is the lack of interactive whiteboard apps (if you know of any please let me know). There are others.

I am hopeful that this new effort will fill the void. So hopeful that I just ordered a classroom cart of 30 Chromebooks. I will pilot the use of these Chromebooks at a summer camp for 150 seventh graders.

+ianobyrne and I will be running a ChromeCamp unconference this summer. Stay tuned for details

In sum, the Google+ features are amazing, but it is Google Play for Education that excites me the most.