Skip to content
On day 3 of the Massachusetts New Literacies Institute I hosted a #hackjam. We all fought some torrential rain and found a restaurant with wifi. It was spotty so we couldn’t develop too may remixes but still participants were amazed about x-ray goggles.

Basically a #hackjam is a self-organized event to show some of the great Mozilla tools such as x-ray goggles that allow you to remix websites. 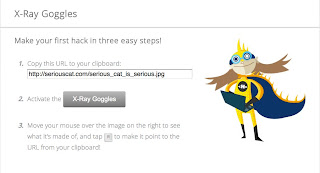 It is such an easy tool to use and a great way to introduce some basic coding to students. I have used it in the past to highlight how words can shape persuasive language.

We began by remixing the New York Times and giving everyone at the table an Olympic medal. We then discussed classroom implications.


This is when we noticed a hiccup. The publishing button for x-ray goggles no longer works. I posted a message to the hackasaurus google group.

Atul Varma, of the Mozilla, Foundation, suggested it was a litigation or security issue. Emma Irwin said it was x-ray goggles getting ready for full deployment out of alpha release.

Either way we needed a work-around. We developed three: screenshots, screencasts, Evernote Webclipper, and Google Drive.


The easiest solution was to take a screenshot. Stephanie did this with her remix of a Facebook page. She created one for a math class studying prime numbers: 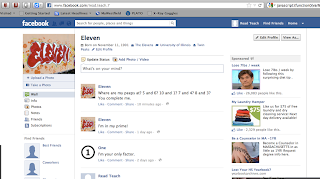 The screenshot only worked with very small frames. We could not take a screenshot using Skitch, or Grabit longer than the window.


I used a screencast to share my remix. It was a tribute to our logistics team Zach and Jim. I apologize ahead of the time for the feedback. I should have downloaded the audio track and reuploaded rather than record it through the speakers. It also short as I clicked on a video link I embedded. It must have refreshed while I was using x-ray goggles.

The work around that I see with the most potential is Evernote. We took a screenshot with Evernote woebclipper and then added it to a shared notebook. I see potential for this for educators. They could share the notebook with everyone in the class. Teachers could then add comments on the remixes and students could add reflections. This would provide important evidence.

Jared also printed his screenshots as a pdf. He then combined the two documents into one PDF document. He then uploaded that document to Google Drive.

This is nice because you can embed the pdf on other sites.


The #hackjam was very successful. Teachers found new ways to teach code and the ideas for the classroom were huge. I look forward to sharing more events in the future.