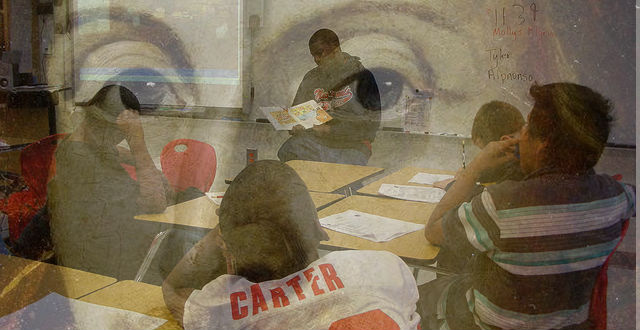 I have often wondered if the Common Core State Standards have a dead white guy bias. It seems that advocates of the common core continuously try to reinforce the idea that reading the classics is the solution to all educational issues. This applies to both nonfiction and fiction

In fact when Michael Petrilli, executive vice president of the Fordham Institute, testifies in support of the Common Core one of the first things he mentions is that the Common Core requires the reading of our Founding Documents. If I would have known reading the Declaration of Independence and the Gettysburg Address were the highest priority in education I would have done it years ago.

I have come to see the bias in the CCSS based on the Fordham Institute recent report “Common Core in the Schools: A First Look at Reading Assignments.” I find thinly veiled ethnocentric beliefs in the suggested instructional approaches and in the suggested reading.

Throughout the report on Common Core implementation is the idea that our educational woes are driven by a lack of content knowledge. In order to overcome systemic inequalities we just need to increase the cultural capiltal by focusing on knowledge and not the skills of what good readers do.

Let us ignore the research from the last thirty years and entertain this line of thinking:

The forward of the report states:

“In trying to improve reading comprehension, schools made a tragic mistake: they took time away from knowledge-building courses such as science and history to clear the decks for more time on reading skills and strategies. And the impact, particularly on our most disadvantaged students whose content and vocabulary gap is so great, has been devastating”

It assumes that strategy instruction is the root of our social woes. The only way to fix the achievement gap is with a heavy dose of dead white guy literature. Background knowledge and comprehension are linked. That is one of the most stable findings in educational research. The more knowledge you have the more you can comprehend. The more you can comprehend the more knowledge you gain. The pendulum may have swung too far towards instruction in disciplinary literacy strategies and comprehension strategy instruction but eliminating these in favor the Great Gatsby and Gettysburg Address will not serve children well.

Instead what we need to do is build in opportunities to read and write like historians and scientists into out content area classrooms. I am hopeful the CCSS will help move us in this direction. However, it cannot be about content alone.

According to Common Core supporters high quality dead white guy literature is also important for English Language Leaerners. In a recent speech to the National Hispanic Christian Leadership Conference Kathleen Porter-Magee, who wrote the forward to the report, spoke of the need of complex text for ELL learners. She gave an example of a leveled “Great Gatsby” text.

In a “retold” version that is given to intermediate readers, that opening is boiled down to this:
“My name is Nick Carraway. I was born in a big city in the Middle West.”
Even more distressing is the version given to “beginning” readers:

My name is Nick. This is my friend. His name is Jay. Jay has a big house. See his house.

I agree with Porter-Magee that the beginning reading is not complex and does not allow for the intellectual capital of our second language learners to flourish. Yet if I am trying to teach a student who just arrived in this country to read English I would never use the full version of “Great Gatsby”. That seems even more inhumane.

Giving a student who does not speak English the “Great Gatsby” will not end the achievement gap. It is silly to think so.

Most gregarious in Appendix B is the list of recommended readings. What follows is a collection of books by dead white people about dead white people. In fact Appendix B states that the only selection criteria used was complexity, quality, and range. Representing the underrepresented with books about characters that actually look like the children we teach was not even considered! That is a national tragedy.

The authors of the report note that the appendix is not a suggested reading list, but they then go on to judge reading programs using the same list. So programs that use contemporary and culturally relevant literature would score low.

For example the report states that,

As a result, classic literature has, in many classrooms, been replaced by popular teen novels (often made into movies) such as The Hunger Games and Twilight. Indeed, the former, according to Renaissance Learning (more below), became the most widely read book in grades 9-12 following its theatrical release in 2012

It goes on to say:

Similarly, research published in 2009 by Renaissance Learning (the company that produces the “Accelerated Reader” program) found that “Ten of the top 16 most frequently read books by the 1,500 students in the top ten percent of reading achievement in grades 9-12 in the database for the 2008-2009 academic year were contemporary young adult fantasies.”

To say modern fantasy has no place in the reading programs of today’s high school is a travesty. The character development and conflicts are often quite complex and more than make up for some inadaquete readability scale. After all, if the students  choosing to read modern fantasy are in the top percent of reading ability there must be an instructional value.

This bias towards dead white guy literature is actually inherent in the anchor standards of the Common Core State Standards:

CCSS.ELA-Literacy.RL.11-12.7 Analyze multiple interpretations of a story, drama, or poem (e.g., recorded or live production of a play or recorded novel or poetry), evaluating how each version interprets the source text. (Include at least one play by Shakespeare and one play by an American dramatist.)
CCSS.ELA-Literacy.RL.11-12.9 Demonstrate knowledge of eighteenth-, nineteenth- and early-twentieth-century foundational works of American literature, including how two or more texts from the same period treat similar themes or topics.

The only required documents students have to read are: our founding documents, Shakespeare, and dated dead white guy novels.

How to fight for Culturally Relevant and Young Adult Literature.

Know the research. Get involved. Follow the work of leading African American, Hispanic, or literacy scholars who advance the field of culturally responsive curriculum.

Do what is right. Our students need to read about characters that look like they do. They need stories with conflicts that reflect the realities of their lives. Include these in your program. Fight against those who say the woes of our urban youth are caused by a lack of dead white guy literature.

I support the Common Core State Standards. I believe the anchor standards (not grade level expectations) provide a holistic approach to educating well prepared and well rounded students. I just want a better Appendix B.